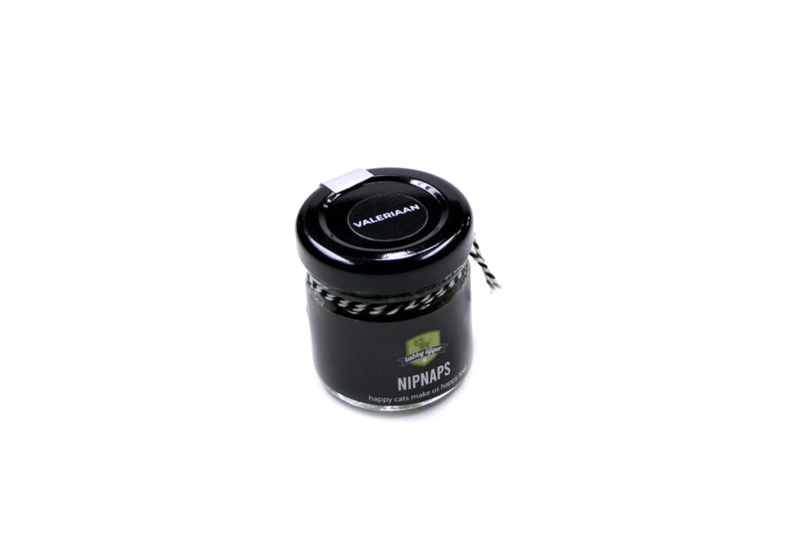 If you have witnessed the effect catnip can have on your cat, wait until you see them busy with the NipNaps valerian root!
Valerian is known for its calming and soothing properties on humans. But did you know that it also has an irresistible euphoric effect in cats?

Benefits:
-The root contains valerinone which induces a similar reaction in cats as in nepetalactone in catnip. Valerian releases a very special fragrance, which is often compared by humans with smelly socks. But cats love it because they are just strongly attracted by this smell.
-It will give the cat a small energy boost followed by a 'zen' period where he or she completely unwinds.
-If only the best for your cats is good enough, then NipNaps offers the most qualitative catnips available today.
-NipNaps are packed in a small dose in airtight jars, so that the smell is preserved for a long time and the catnip does not eventually mix with the smell of a plastic packaging as offered in most cases.
-NipNaps tries to keep the herbs 99.9% pure so that your cat can enjoy them in a safe and above all healthy way.
-NipNaps catworts do not contain chemicals or sprays, and only dried chicken manure is used in season to increase biological activity in the soil.

Material:
The NipNaps 'Valerian' is composed of dried valerian root from Poland.

What is valerian:
While the human reaction is one of sedation and relaxation, cats are driven into a euphoric frenzy by the smell of valerian and the domestic cat affects in a similar way to that of catnip. For humans, valerian has an unusual smell similar to sweaty socks. Cats have been naturally attracted to the Valerian for centuries. Clinical studies have shown that cats that had digested 10 mg/kg of a valerian extract recorded a significant decrease in anxiety, anxiety and aggressive behavior. Valerian as a fragrance stimulation is recommended by the Feline Advisory Bureau.

Is it OK for my cat to eat valerian?
Valerian is a safe herb for your cat, but we do not recommend having it eaten from the root. For maximum pleasure, it is best to incorporate this valerian into toys.

How long can I keep valerian?
Thanks to the airtight glass jars, the NipNaps herbs continue to smell much longer. If the jars are stored in a cool place (yes, even in the refrigerator), NipNaps can keep valerian even longer than 18 months.